Today is the day that I got the wifi setup. This is going to be really important since I cut the cord and will no longer fork over $230/month to Comcast. It took me a few more days after the wifi was setup to get the TV’s hung and programmed. I’m not much of a TV watcher but as soon as the boys are staying here it will definitely be a necessity.

Have I mentioned my spreadsheets? Prior to moving I’d created a few spreadsheets. One included my renovation schedule. I wanted to be sure to be thinking of the order in which things needed to happen. For example, I needed the wall down so that I could build the kitchen island and install the new flooring. 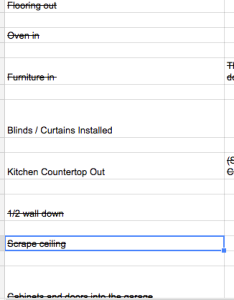 I’m not sure what happened to me, but all of a sudden I felt the need to nest. I was in the middle of demolition, but I was really more interested in making the house feel as much like “home” as possible. I hadn’t planned to do any decorating in my spreadsheet schedule but it felt really good to stop bulldozing things and start arranging a few areas that somewhat resembled what I’d been Pinning for months. This was also the day that I assembled my home work station. My computer now had a home and I could officially (efficiently) work from home!

I got the cutoff door from a dumpster in Minneapolis a few years back. The table top is from an old abandoned train in Gwinner, ND. The legs are from Curbside Cleanup night where my girlfriends and I rummage through discarded items on the streets once a year. The wood that’s framing the door is from an uncle’s torn down fence. The mantle, rearview mirror and flower thing are from flea markets. It’s a tiny workstation but this small space is the one that I spend the most time at. 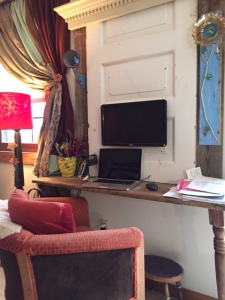 My friend Kelly came over this day and helped me hang the curtains. It’s a two person job because of the board that the curtains are stapled to. We balanced on swivel stools and chairs, running for longer screws while the other one held the board up over our head.  I didn’t have a ladder yet and nesting without a ladder gets dangerous. 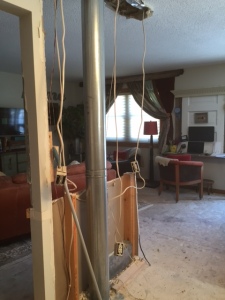 I recall hanging a very heavy mirror with one foot on a chair and the other on my banister. I’m sure you can picture it. I must have had a death wish that night. 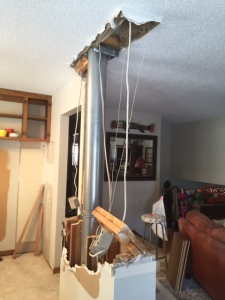 The boys were spending these first few weeks of demo, and nesting, at Jason’s house. My goal was to have the house ready for them by 1/3/16, which was when school resumed. It was just about Christmas and Jason and I were excited to get the boys phones. We celebrated a little bit early and taught them how to call, text and Facetime…who am I kidding.  Kids are born knowing how to do those things.

Below is a screen grab of my fav text messages ever. I might seriously frame it. It came from Jeratt on one of the first nights that I was at the new house and he was at his dad’s. (I screen grabbed it the next morning) If you’re friends with me on FB, you’ll already know that this means “I Love You” in our house. If you’re not friends with me on FB, now you know. It’s weird, but I like it because I’m certain we’re the only family with this “tradition.” 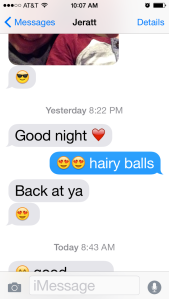 It’s funny to look back at the pictures that I thought had looked like progress now. I’m certain that when I proudly shared them with my friends and family they were thinking that I was insane. I wasn’t insane and I’m still not insane. I can do this and I’m actually having a ton of fun learning along the way!