You Guys! Every once in a while during one of my DIY projects, I get myself into a pickle because the task really isn’t DIY. A helping hand is needed here and there and I typically don’t realize it until I’m in the middle of something not-so-safe.

My kitchen island light fixture started off with a clearance fixture from Home Depot. It was the floor model and they sold it to me for $9.99!

When the electrician was here removing the curtain of wires from the wall removal, he tried to hang that fixture but it kept tripping the power. Something was wrong with it and taking it apart sounded like more effort than I was interested in. I set it in my “to return to the store” pile.

I searched for ideas on Etsy and found some pretty neat ideas! They’d used plumbers pipe and a fixture that had 10 strings and Edison light bulbs.

I searched Craigslist and found exactly what I needed. That doesn’t happen very often and I was so excited to meet the Craigslist seller at her workplace parking lot the next day to solidify the deal. 😮 She was selling TWO of these light fixtures and even included a few dozen of the Edison bulbs for just $45.00 total! I already had the plumbers pipe from a different project that didn’t end up turning out. 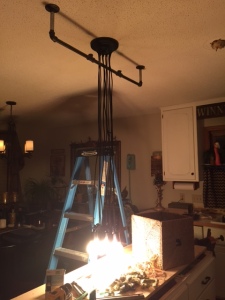 I completed wrapping the strings and didn’t love it. It looked sloppy. I tried to add different ribbon and rope but I felt like that only made it look worse. Also, this fixture is not on a dimmer and having 10 light bulbs on in a row like that makes you feel like you need to wear sunglasses in your home! 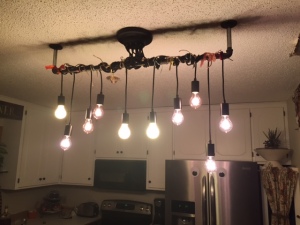 I took a shopping trip to an antique store with my friend Kelly to look for things that could be repurposed into light fixtures and scored big! I really like the little yellow one. It was an ashtray that attached to lawn chairs from the 70’s.

From L to R: vintage strainer, lemon pie mix, potato chips, butt’s, pretzels. The other things are embroidery looms that I had already. I planned on using them for something else, but they work perfect here. I put them together and spread them out to make sphere-looking things. 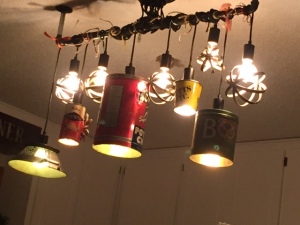 Ugh. Sloppy. It’s funky and fun, but all of the strings on that pole just look messy to me. I lived with it for a bit to see if it would grow on me. It didn’t. I disassembled it spur of the moment one night and tried a different idea that I’d also seen on Etsy.

Note: my temporary kitchen island counter top is just a bunch of planks that are not screwed on.

So now that I had the entire thing dismantled, including removing the plumbers pipe, I could start from scratch. I wanted to hang a beam instead of plumbers pipe. I had the perfect beam in my garage that I had grabbed from somewhere over the years. I thought it was cool, but I’d never found a use for it until now! It was a little bit heavy, but not anything that I couldn’t lift up over my head.

I just had to figure out how to screw one side of the beam to the ceiling while at the same time, holding or propping the other side up. I’m sure you can see the predicament I was in…

The boards are wobbly.

The ladder was propped to hold one side of the beam up while I screwed the opposite side into the ceiling. I saw my life flash before my eyes as I was standing on the island’s wobbly boards while trying to balance the beam on the highest rung of the ladder and screw the somewhat heavy beam up over my head. 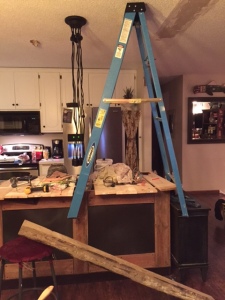 I had to call for help. This happens very rarely, folks! But, when I need help, I need it fast.

Kelly was over in just a few minutes, yay! We brainstormed quickly, removed the ladder from being jammed between the island and the ceiling and hopped up onto the wobbly boards with the beam in hand. We got the first screw in and my drill died. This happened to us when we were hanging the curtains as well! Just like before, I left Kelly holding the heavy beam up over her head while I went to find my other drill battery.

While screwing in the other side we noticed that the beam was actually a little twisted. This meant that the hardware wasn’t able to sit flush with the ceiling. Unless, we pushed REALLY hard. Since we had to push really hard to keep it flush, the screw was going to have a lot of pressure on it as the beam wanted to pull away from where we were screwing it. I hopped down to find a zip-it (screw anchor) and left Kelly holding the beam once again.

With the anchor in place we pushed the beam up as hard as we could and got the final screw in. This was SO exciting. Now, we just had to hop down carefully from the kitchen island and the wobbly boards to get a good look at our hard work.

It was a bit late to fiddle with the strings and fixtures so I returned to it the next day. I’d also found a beaded bowl at Goodwill a week prior. I thought that this would be nice and swapped out the potato chip canister for the beaded bowl.

Now I love this island light fixture so much! 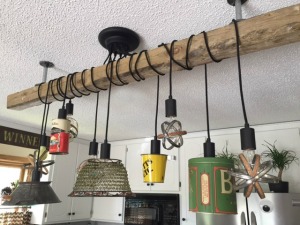